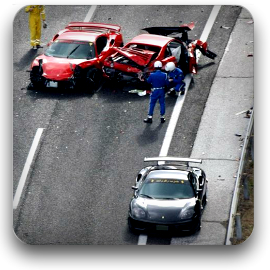 Last Friday brought upon an eight car pileup in Baltimore County that left nine people injured. One of them is in serious condition.

The accident happened at the intersection Baltimore Street and North Point Boulevard in Dundalk. It is stated by county police that a tow truck veered out of its lane and into another vehicle which caused the eight car pileup.

Out of the eight vehicles, nine people were injured. One person denied medical attention while another person suffered life threatening injuries.

There is still no word on whether or not alcohol had a role in the accident and it is still under investigation.

Pileups can happen so easily when traffic is thick. It is important to stay a safe distance away from the vehicle in front of you and to pay close attention to your surroundings. This will help you avoid a possible accident.

Unfortunately, with even with all of the safety precautions taken, an accident can still occur when another driver is negligent in their operation of the vehicle. This is when you will want to call a Washington DC accident lawyer for legal assistance. They will help investigate the cause of the accident while building your case to seek compensation.