According to CBS DC, the wet and slippery roads set of one accident, which soon turned into three separate collisions, causing injury to a Safety Services officer and damaging two patrol cars.

The chain of collisions began at 8:30 a.m. on Interstate 95 near exit 150, CBS said. Virginia State Police and the Virginia Department of Transportation and Safety Services responded to a three car accident when two additional vehicles crashed into the original accident scene just six minutes later. 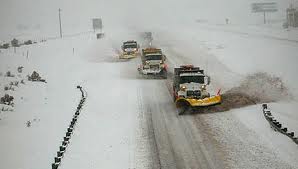 Shortly after authorities arrived to the accident scene, roughly four minutes, a Nissan pickup truck lost control and ran off the road colliding with a patrol car while a trooper was inside and two of the three vehicles involved in the first accident.

Then approximately six minutes later CBS reported a Ford pickup truck slid into a VCDOT Safety Services vehicle, which had responded to the initial collision. The impact of that collision caused the VDOT vehicle to slam into a Safety Services employee who was standing outside. The truck also hit the other patrol car on the scene.

The Safety Services employee was taken to a local hospital for non-life threatening injuries. The only person charged for the accident was the Ford pickup truck driver who was cited for reckless driving.

This chain of accidents clearly demonstrates the danger of driving on icy roads, and you won’t be dismissed of any liability if you cause an accident in winter weather conditions. Icy Roads.com, a website dedicated to tracking accidents, and warn people of the dangers or driving in winter weather, reported that in the 2009 through 2010, 10 people were killed on icy roads in Virginia alone.  Nationwide, during the same time period 458 people were killed on slick and icy roads.

Overconfidence and speed are among the leading causes of inclement weather accidents.  Just a light dusting of snow or a small amount of freezing rain can turn a street or highway into a sheet of ice. Many drivers fail to realize that under these conditions they need to slow down significantly, suddenly applying the brakes will cause a driver to lose control and slide all over the road; it nearly impossible for even the most experienced driver to regain control of their vehicle under these circumstances. Chances are you won’t be the only car on the road, and a collision with another driver is inevitable.

While not all icy road accidents result in fatalities they can cause severe personal injuries and costly property damage for which the negligent driver will be held responsible.

If you have the misfortune of being injured in a traffic collision in Virginia or Maryland you will need an experienced negotiator or litigator to recover your accident-related costs. Accident attorney Lawrence Lapidus has assisted many injury victims in successfully obtaining appropriate and generous settlements from careless drivers and their insurance companies for decades.