It has been an ongoing problem in the DC region for several years. When we first published this story back in 2013, it was all about the massive amounts of people coming into the city on a daily basis. Now, with the city’s population inching closer and closer to 1 million residents, it is evident that the gridlock is here to stay.

That being said, officials know the best and only answer is to manage it as best as possible. Kristi King with WTOP explored this very topic in depth. Click here to read it.

Washington, D.C. – Looks like a ridiculous amount of gridlock in Washington D.C. is not exclusive to lawmakers as a new report from Texas A&M University’s Transportation Institute ranked the capital as the U.S. city with the most traffic congestion. This shouldn’t come as surprise for the many people who spend hours of their day sitting in D.C. traffic. 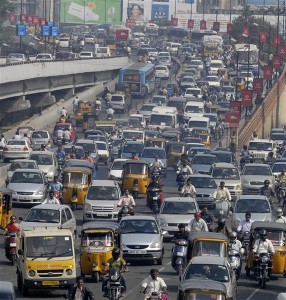 Other cities with heavy congestion include Los Angeles, Newark/ New York, and Houston.

According to the Texas A&M study, motorists in the D.C. area spend an average of 67 hours a year in their vehicles and wastes 32 gallons of gas a year. That’s a lot of wasted time and money, but it gets worse.

According to the university’s model the congestion will only get more intense as the economy improves and more people hit the roads. They estimate that by 2020, the average American motorist will spend an additional seven hours a year traveling and burn an additional six gallons of gas, the Washington Post reported.

But that isn’t all; the researchers also calculated the amount of extra time a D.C. motorist would need in order to reach their destination on time, referred to as the “time allowance” index. According to the Institute Washington D.C.’s ranking on that index is 5.72, meaning that if you had to drive 30 minutes to get to your destination, which isn’t unheard of for commuters in urban areas you could need to allow yourself 171 minutes (5.72 x 30), or 2.85 hours to arrive on time during rush hour. Yikes!

Given that many people have the tendency to run behind, most won’t plan to spend almost three hours in traffic and will instead race and make risky driving maneuvers. In haste drivers will change lanes erratically and drive far too fast for conditions.

Traffic gridlock along with masses of people in a great hurry is a recipe for disaster and can lead to traffic collisions. It only takes a moment to cause a deadly or injurious crash in bumper to bumper traffic, especially if a driver is speeding. Sitting in gridlock can also take a driver’s attention of the road as they try to occupy their time.

One mistake can set or a chain of collisions resulting in property damage or harm to one or more motorists. While some injuries resulting from a collision can be minor many people are seriously injured and can face months of recovery or worse permanent disability.

When a person is injured because of reckless and careless actions of another they don’t have to pay for their medical costs and property damage out of their own pockets. If their injuries are serious enough they will be forced to miss time at work and may find it difficult to meet their everyday expenses.

With D.C. accident attorney Lawrence Lapidus, you as the injury victim won’t have to struggle to pay your bills. He will work with you personally and diligently pursue a financial settlement that is fair and just.

As we begin 2022, it’s unfortunate to say that hospital stays and doctors’ visits are …

In order to help you more quickly, please fill out the quick form and submit or call 202.785.5111. A representative will call you ASAP.
Search Engine Optimization Copyright ©2015