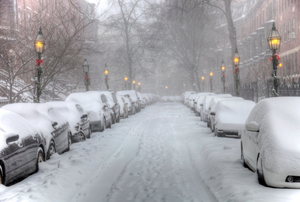 The driver—a man in his 40s—was trapped in the vehicle and had to be extricated by emergency crews.

He was in critical condition and unresponsive as fire crews removed him from the wreckage. He was flown to a nearby hospital but was pronounced dead upon arrival.

Later that day, in Chevy Chase an additional accident on the Beltway near Connecticut Lane left the all lanes closed.

Maryland State police told the Washington Post, a Chevy Malibu passenger car hydroplaned while taking a curve around 7:40 p.m. and crossed the lanes of the Beltway. The out-of-control passenger vehicle struck a Toyota pickup. The Malibu was then struck by a Chevy Silverado.

Two passengers in the Malibu, a 30 year-old woman and a 17 year-old man both from Sliver Springs initially survived the crashed and were taken to a local hospital, but they later died from their injuries.

The driver of the Malibu a 36 year-old was also incurred serious injuries. Others involved in the accident sustained only minor injuries.

A 78 year-old Maryland woman was also killed in a collision on Christmas Eve.

Patrol cars were positioned along 1-95 to slow motorists down.

The winter storms which began late last week blanketed the Midwest in snow and resulting in six deaths. After making its way east, the storm is causing more dangerous road conditions in D.C. and other areas in the Southeast.

Driving in on snow-covered and icy roads can be extremely dangerous. Many drivers take unnecessary risks, like driving too fast for conditions or suddenly braking. If you happen to be a driver who causes a collision involving property damage or personal injury, you are still liable for the damages you cause.

Fatal and injurious accidents are costly both financially and emotionally. Accident victims and surviving family members need assurances that any of the costs they incur won’t be coming from their pockets. A

Washington D.C. accident attorney Lawrence Lapidus has been helping victims of traffic accidents maximize their settlements for three decades. If you hope to obtain a fair and just settlement either through the negligent driver’s insurance company or through a court trial Mr. Lapidus is the right man to represent you.

If you stumbled upon this page, you were probably looking for a highly-skilled Physician Malpractice …