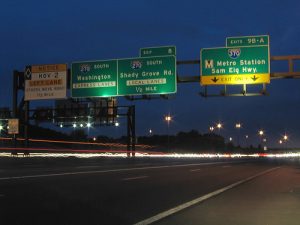 According to a Maryland State Patrol press release, Durandal hit the concrete barrier between the northbound and southbound lanes. CBS DC reported that the impact of the crash was so powerful that pieces of the barrier where broken off and tumbled into the northbound lanes. Authorities had to bring a bulldozer to clean up the debris.

Durandal died on the scene and she did not have any passengers; no other vehicles were involved in the accident.

CBS also reported that police suspect the accident was caused by driver error and speed. The exact cause of the accident is still under investigation, but police have ruled out drugs or alcohol.

There was also another single car accident on I-370 just before I-270. This accident occurred at 6:58 a.m. when a 23 year-old man flipped his Mercedes for unknown reasons.

The man was taken to a local hospital for treatment but was released later that afternoon. Police are still trying to determine the cause of this accident.

Further west in Finksburg a 29 year-old man was killed in a high-speed police pursuit on Monday. According to WBAL radio, a Carroll County Sherriff Deputy observed Jeremiah Haas, 29, approaching him at a high rate of speed.

Deputy Colussy turned on his emergency lights to warn the driver, but Haas blew past him and initiated a pursuit. Colussy continued to follow Hass on Old Gambler Road until he turned onto Old Westminster Pike, where he lost sight of Hass’s truck, WABL reported.

Colussy continued to look for the truck and a short time later discovered that Haas had slammed into a van on Route 140. Haas was taken to a local hospital where he was later pronounced dead.

The 23 year-old man who was driving the van was also injured, but was released from the hospital later that day.

At least two of these accidents have one thing in common, speed. Drivers put themselves and others in danger when they drive in excess of the speed limit and the collisions they cause can be deadly or lead to severe injuries. According to a study by the NHTSA from 1998, the last time this data was analyzed, speed was a factor in 30 percent of nationwide traffic accidents.

If you have the misfortune of being injured by a speeding driver, you have the right to seek compensation from the negligent driver. Accident victims, who want to hold a negligent motorist accountable for the injuries they cause, will find a vocal and accomplished advocate in accident attorney Lawrence Lapidus. For decades Mr. Lapidus has helped personal injury victims get the settlements they are entitled to.