Washington D.C. – A Washington D.C. man and one of his coworkers were killed in a traffic accident in highway work zone Wednesday morning, according to Maryland State Police. 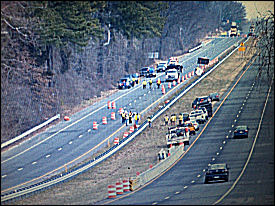 The accident took place around 9 a.m. on Pulaski Highway in Bowie when a driver entered a work zone flanked by orange cones and struck the two men.

Both men, Luis Tadeo, 45, of Bowie, Maryland, and Victor Jackson, 41, of Washington D.C. were pronounced dead at the scene, according the Baltimore Sun.

According to another eport by WBAL police said that a driver crossed into the clearly marked work zone striking the two men who were in the process of putting out orange cones in the left lanes of the highway.

“He was in the right lane and, for unknown reasons, he veered into the left lane after passing or entering the work zone area,” Lt. Stephan Konold told WBAL-TV.

One witness also told WBAL the front of the driver’s Ford Focus had a “smashed” up front end and windshield.

The driver was not injured but was briefly taken into custody.

State police spokesman, Sgt. Marc Black told the Baltimore Sun, “He was taken into custody for questioning. He was released without charges and is not being identified at this time due to pending charges.”

Because of the accident, the westbound lanes of Puluski Highway were closed for several hours.

While fatalities in highway construction zones are much rarer than traffic fatalities overall, any loss of life is tragic and preventable. According to Workzonesafety.org, in Virginia, Maryland, and the D.C metro area 15 people were killed by work zone accidents in 2010 alone. Nationwide, on average 100 highway workers killed each year,

Of those fatalities, 60 percent were killed by trucks or other work vehicles as opposed to tractor-trailers and passenger vehicles, according to the Centers for Disease Control.

In addition to fatalities, 20,000 highway workers are injured throughout the country; some of these injuries can cause disability resulting in steep economic losses for the victims and their families through costly medical care costs and loss of wages.

Work zone fatalities and injuries are often covered by workman’s comp, but at a bare minimum and at a cost the state taxpayer. Legislators and employers have been diligent in their efforts to curtail personal injuries in work zones through enhanced regulations and safety training, but this only extends to workers and cannot prevent collisions caused by drivers.

If any of personal injuries or deaths are caused by a negligent driver, those injured deserve to be compensated fairly.  When you have been injured in a traffic accident, either in a work zone or the streets, you need to contact an accident injury attorney with a great deal of experience.

In the Washington D.C. area, accident victims frequently turn to personal injury attorney Lawrence Lapidus to represent them and build a strong case that will assure they receive the maximum amount of compensation for which they are entitled.