Across the Country: National Medical Malpractice News and Updates

“Pedestrian Only” Street in DC 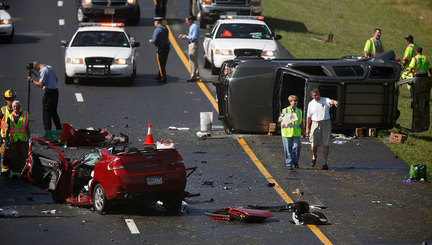 Fatal accidents overall declined by 1.9 percent, resulting in 32,367 deaths, the lowest number since 1949. There is a combination of reasons fatal accidents have declined, for one the number of miles people drive on average dropped 1.2 percent, the Washington Post reported.
According to NHTSA statistics from 2011, 1.10 deaths occurred for every 100 million miles driven, the lowest level since such data was tracked, down from an average of 1.11 fatalities per 100 million miles.
Enhanced safety features on vehicles are helping many drivers avert collisions. And more motorists are using their safety belts which can significantly boost a person’s chances of surviving a serious accident, especially those involving head-on collisions and roll-overs.
Even though fatal accidents involving passenger vehicles are on the decline, fatal accidents involving cyclists and large trucks have increased dramatically.
The rise in deaths among cyclists can be attributed to an increase of cyclists on the road to travel to work and for fun. Cycling offers people the chance to increase their fitness while also utilizing a greener mode of transportation. But with more bicycles on the road there is also the increased chance of being involved in an accident.
In Washington D.C., cyclist fatalities increased by 175 percent during morning and evening rush hours since 2004, according to the Washington Post.
But even as Washington D.C. has taken steps to enhance the safety of cyclists by adding more bicycle lanes this hasn’t helped stop unnecessary deaths of bicyclist. By far the most common cause of vehicle and bicycle accidents is distracted driving.
Motorists often fail to yield to cyclists in intersections and contribute to 21.6 percent of all bicycle accidents, according to the U.S. Department of Transportation. Drivers who make unexpected turns in front of bicyclists cause 12.1 percent of all accidents.
While it is easier to understand why cyclist fatalities increased, experts are perplexed by the dramatic increase in large truck fatalities. The improving economy could be one explanation, as demand for goods go up, so too does the need for transportation. Another contributing factor could be state increases in speed limits.
While the majority of truck accidents are caused by error on the part of passenger vehicle drivers, many other accidents can be attributed to truck drivers who are often on tight schedules often leading to speeding, driver exhaustion.
Accidents regardless of the mode of transportation can be devastating, often resulting in death or serious injuries. Some personal injury victims face becoming temporarily or permanently disabled. And the cost for these accidental injuries can be exorbitant; it isn’t unusual for accident victims to rack up hundreds of thousand or dollars in medical bills.
Accident victims don’t have to worry about how they are going to pay their medical bills when they hire Washington D.C. injury attorney Lawrence Lapidus to build their case and hold a driver accountable for their reckless actions.

If you’ve ever been to Washington, DC, you know how busy it can get. Not …